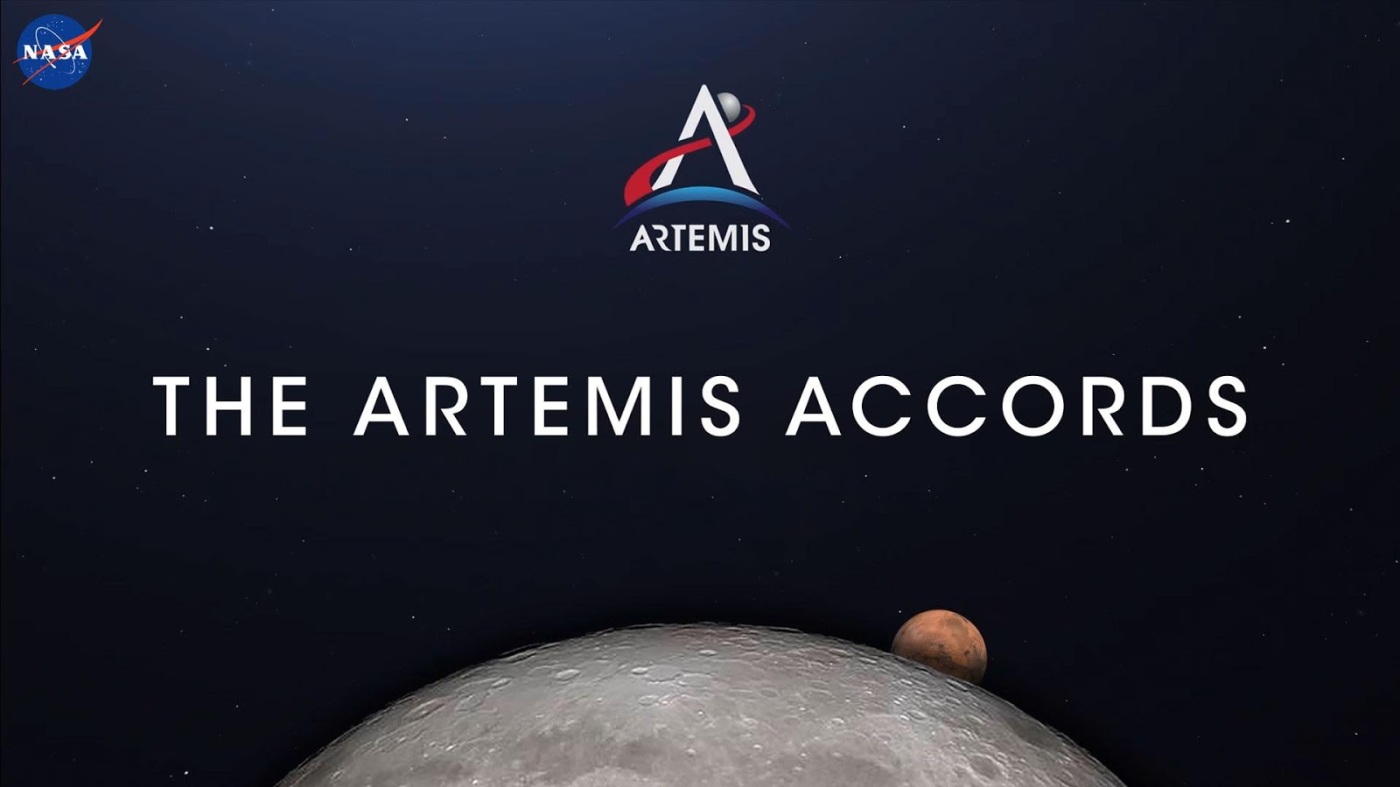 This article is dedicated to the Artemis Accords and how the treaty could facilitate outer space security by providing a uniform space resource extraction policy. In contrast to traditional international and national norms, this treaty will be fruitful and help to establish the global regime of space resource extraction for two reasons: space safety is a major aim of the treaty; the Artemis Accords might provide the vital framework pursuant to Article 31 of the Vienna Convention on the Law of Treaties (1969).[1]

Are states interested in the extraction of space resources? Historically, the problem of limited resources and the desire to gain more of them have always led to conflicts between states. For example, World War I began because of the battle for markets and colonies. Currently, this issue has only exacerbated since there is a myriad of non-renewable resources. This tendency leads to competition between nations and undermines international security.

Given the resource scarcity problem, many options have been proposed, including space exploration. In other words, celestial bodies are a promising source of replenishment of scarce resources, especially minerals; for example, rock-metal asteroids (class M) contain platinum, nickel, cobalt, iron, gold. Due to the high concentration of celestial bodies’ resources, this option is assessed as prosperous for future implementation.

In this regard, it is not surprising that states and global corporations have attempted to begin exploring such resources with a view to their subsequent extraction. An indicator of this is the real boom of private companies aiming at mining: Deep Space Industries, Planetary Resources, Moon Express, ASTRO, and others. Considering this boom, states began to adopt national regulations regarding mining space resources, for instance, the US Space Resource Exploration and Utilization Act (2015).[2] It was the first national act on this topic; for this reason, other states started to implement similar legislation. Besides, plenty of countries, including South Korea, plan future space missions for exploring such resources.[3]

Even though such activities, in general, should be assessed positively, as they help humanity to move forward,  the separate activities of states and corporations lead to an increase in international tensions since no one wants to be lagging. It creates conflict between countries, which, right now, do not go beyond the discussions in the United Nations Committee on the Peaceful Uses of Outer Space (hereinafter referred to as UNOOSA). However, the different positions of  Russia and China, on the one hand, and the United States, on the other hand, lay the foundation for more complex clashes. Nevertheless, the author believes that they might be resolved using international instruments such as the Artemis Accords.[4]

From the point of view of international law and international politics, the Gordian knot lies in the impossibility of an unambiguous answer to the following question: «Is it permissible to extract minerals in Space? ». The impossibility exists since the international legal regulation of the space resources extraction in outer space, de-facto, is limited by the Treaty on Principles Governing the Activities of States in the Exploration and Use of Outer Space, including the Moon and Other Celestial Bodies (1967) (hereinafter referred to as the Outer Space Treaty).[5] Additionally, there is another act raising this question – the Agreement Governing the Activities of States on the Moon and Other Celestial Bodies (1979) – however, it should not be taken into account since most states have not ratified this act.[6] Nevertheless, even if we consider Article 11 of this Treaty, then the ban on the extraction of resources is established only concerning the Moon but does not apply to other celestial bodies.

Returning to the Outer Space Treaty, its regulation is ambiguous since there is a conflict of interpretation between Articles I and II. In the debate over space resources mining’s legality, as a rule, free exploitation (Art. I) conflicts with the non-appropriation principle (Art. II). Despite the internal conflict, there is no doubt that all states come to the interpretation, legitimized extraction. It corresponds to the interests of all humankind with respect to the Outer Space Treaty Preamble. However, M. Yuzbashyan noted the impossibility of agreeing on a special international regime within a universal international treaty framework.[7]

Nevertheless, there are quite convincing legal arguments presented to prove the admissibility of extraction. It is essential to discuss them before proceeding to the Artemis Accords analysis, as it is based on the mining capability enshrined in the Outer Space Treaty.

However, as mentioned earlier, there is no uniform approach among states at the international level. For example, the Ministry of Foreign Affairs of the Russian Federation has repeatedly proposed to fix the direct impossibility of appropriating resources extracted in space. On the other hand, back in 2015, the United States adopted the Space Resource Exploration and Utilization Act (hereinafter referred to as the US Law). These examples demonstrate that there are contradictions among the space powers, i.e., countries that can carry out outer space activities. Moreover, these states are members of the UN Security Council and directly affect global relations. It leads to the impossibility of developing a single international policy and legal regulation if one of these powers opposes. Besides, China, India, European states, and others’ interests could not be ignored in the modern multipolar world.

The impossibility of developing a uniform global solution led to attempts to legitimize space resource extraction by using national legislation. For instance, the US established the Space Resource Exploration and Utilization Act (2015) mentioned earlier; nevertheless, this is not the single American act on this issue. Notably, in April 2020, Donald Trump signed an Executive order confirming the space resource extraction legality carried out by the Americans.[11] Besides, he noted that the United States did not recognize the province of all humankind principle. Another example is the Luxembourg act «On the Exploration and Use of Space Resources» (2017).[12] However, unlike the US Law, this act is based on the concept of res nullius in contrast to universally accepted res communis. The United Arab Emirates also passed a national law regulating the space sector, seeking to legitimize resource extraction.[13] In addition to those indicated earlier, several states are currently developing similar legislation. However, this approach suffers from shortcomings, especially, one of the possible consequences of the many national laws adopted may be their incompatibility and, as a result, international conflicts between countries. Guided by this consideration, within the framework of the 56th session of the UNOOSA Legal Subcommittee, most states’ delegates emphasized the need to develop a coordinated multilateral international legal regime.[14]

Indeed, considering the national regulation’s existence, questions arise regarding its legality and relation to international norms. Most states have already condemned the United States, Luxembourg, and others’ actions, since impossibility to using the national policy instruments concerning international level policy. As V. Kopal notes, the Outer Space Treaty establishes the absence of state jurisdiction over celestial bodies since they are recognized as res communis.[15] The possibility of adopting legislative acts is due to state sovereignty, which is limited by its territory. On the contrary, res communis means lack of jurisdiction. In other words, it is unacceptable to adopt a national act that would resolve the issue; thus, the problem can be resolved only through international communication and appropriate global instruments.

Nonetheless, the importance of national legislation could not be underestimated pursuant to paragraph 3, Article 31 of the Vienna Convention on the Law of Treaties (1969), because they can play a significant role in interpreting the Outer Space Treaty provisions related to mining. Many scholars are inclined to this option; for example, K. Shestakova, guided by this provision, admitted the possibility of applying national laws as a subsequent practice to establish a rule providing the possibility of extraction.[16] Recent years’ events associated with the space activities intensification demonstrate that the balance is gradually beginning to predispose in favor of allowing space resources extraction.

Another opportunity for national laws to play an essential role in the international rule establishment is to prove custom. Under Article 38 of the International Court of Justice as the International Law Commission at the sixty-eighth session report (hereinafter referred to as the Report), it proves that the custom existence requires two elements: general practice and its recognition as law.[17] The report clarified that national laws might be taken into account when defining each of the elements. At the moment, it is impossible to speak of the custom establishing that constitutes the space resources extraction since there is a lack of extensive and uniform practice confirming this. For example, Thomas Cheney notes that many states express dissatisfaction with the US Law contrary to international order.[18] Accordingly, opinio juris also does not yet exist.

Summarizing all of the above, there is a problem due to the lack of precise international regulation, which states cannot solve independently through national legislation. Otherwise, it will lead to colossal contradictions between states, which, at the moment, are limited only to diplomatic conversations; however, the closer the start of extraction, the greater chances of conflict will become. States are not ready to make amendments to the Outer Space Treaty since the international community lacks consensus. Following, the practice of interpretation or international custom legitimizing mining will take a long time to develop. Besides, there are no discussions about a new universal treaty that would settle this issue. Considering the lack of solution, the global security threats are rising – such conditions led to the Artemis Accords’ conclusion.

On October 13, 2020, Artemis Accords (hereinafter referred to as the Agreement) was signed by eight states: Great Britain, Italy, Australia, Canada, Japan, Luxembourg, the United Arab Emirates United States. Subsequently, Brazil and Ukraine became signatories. Among the signatories, there are no such space powers like China and the Russian Federation; however, due to Section 13 of the Agreement, any states may put their signatures. The Agreement can be called the frame treaty because it establishes the basic cooperation principles and can be realized only through the bilateral agreements between partner countries. The Agreement underlines the commitment to the rules enshrined in the Outer Space Treaty; the Agreement on the Rescue of Astronauts, the Return of Astronauts and the Return of Objects Launched into Outer Space (1967);[20] the Convention on International Liability for Damage Caused by Space Objects (1972);[21] the Convention on Registration of Objects Launched into Outer Space (1974)[22] – thereby embedding the Agreement into the existing international legal regulation.

Has the Agreement brought something new? How does it affect global security?

Hence, the Artemis Accords confirms that countries refused to accept a new universal agreement on outer space, which would have settled the extraction issue. Besides, a return to an international solution instead of a national one is a huge advantage. It helps to reduce the number of conflicts between interested countries that affect the global world order. In this regard, the emphasis on security and peaceful settlement of conflicts within the Agreement is encouraging. Mining is inevitable; therefore, countries must work out the proper rules in advance so that later contradictions would not lead to disputes or, even, the use of force. With this in mind, the Artemis Accords has become a paradigm shift.

[4] The Artemis Accords. Principles for Cooperation in the Civil Exploration and Use of the Moon, Mars, Comets, and Asteroids for Peaceful Purposes, Signed 13 October 2020.

[5] Treaty on Principles Governing the Activities of States in the Exploration and Use of Outer Space, including the Moon and Other Celestial Bodies (General Assembly resolution 2222 (XXI), annex)—adopted on 19 December 1966, opened for signature on 27 January 1967, entered into force on 10 October 1967.

[10] Shestakova, K. (2015), “Extraction of minerals in space: selected trends in the development of international space law”, The fifth conference on airspace law, pp. 100-112.

[11] Executive Order on Encouraging International Support for the Recovery and Use of Space Resources, Issued on 6 April 2020.