In terms of scale and intensity, the South Korea-Japan trade war is far less extreme than the current US-China trade war, not even to mention the sanctions that the U.S. and E.U. have placed on Russia. As a result of the trade war, South Korea and Japan have not signed a free trade agreement (FTA) with each other, but since they joined the Regional Comprehensive Economic Partnership (RCEP) led by China, they already enjoy 95% tariff-free preferences.

The conflict between South Korea and Japan is not about territorial religion or trade monopoly discrimination but is mainly rooted in Korean national sentiment toward the Japanese colonial era. The unresolved historical incidents between Korea and Japan after World War II have exacerbated the difficulties for both governments to improve their relations. As a result, they have taken an uncompromising attitude to comply with public opinion. Under this logic, this article discusses why the Japan-South Korea trade war is symbolically different from other trade wars.

There are various forms of conflicts between countries that eventually result in wars. In ancient times, wars were fought over water, food, and territory, especially when the nomadic era turned into the agricultural era. Then came the industrial era, where wars were caused by the conflict between markets, production resources, and energy. This was the Age of Discovery where powerful western nations colonized other countries. In addition to these, in developing human progress, there were also many wars caused by religious differences and racial exclusion.

However, there are fewer examples of wars caused by trade disputes. In 1840, Great Britain, referred to as the empire on which the sun never sets, started the Anglo-Chinese War in China Canton. At that time, the trading of Opium at Canton, the source of significant revenue for the British Colonial Government in Hong Kong, was banned by the Chinese officials due to a series of diplomatic disagreements between the two countries. Therefore, through the war, the long-time closed trading ports of the Qing Dynasty were forcibly opened by the British.

In 1853, a similar incident happened in Japan under the ruling of the Tokugawa shogunate. The expedition, commanded by Commodore Matthew Calbraith Perry, brought the United States Navy to the Land of the Rising Sun. Through the use of gunboats, the Perry Expedition also managed to compel the Japanese to open its ports to American trade and broke Japan’s 220-year-old policy of isolation, referred to as the policy of Sakoku.

In 1990, Japan experienced rapid economic growth and even overtook the United States as number one in the auto industry. To stop the uprising of Japanese influence, the United States joined hands with Britain and France to force Japan into signing the Plaza Accord, a joint agreement that has furthermore intervened in the Japanese currency market. As a result, the following sharp appreciation of the yen has contributed to Japan’s recession, which is still felt 30 years later.

These wars were the result of trade disputes and subsequently turned into physical gunpowder invasions. However, in modern society, due to the empowerment of globalization, the trading and economic development between each other have become more coherent and connected countries. Moreover, with the advanced improvement of technology in weapons, the damage of a physical war causes way too severe repercussions for any country. Therefore, tactics of wars have transformed into other forms, such as putting high taxes on certain companies to make them less compatible or joining hands with other forces for boycotts, in other words, the trade war.

International trade is not only about the difference in productivity between countries but focuses more on the difference in consumption power. A trade war is an international dispute caused by an imbalance in trading. Therefore, that is why Trump has started the trade war intended to stop the vast trade surplus of China with the U.S. Although there are more details of threats that Trump has felt from China, for instance, the uprising of China taking over the U.S.’s hegemony and overthrowing the value of democracy and human rights.

South Korean Foreign Minister Park Jin visited Japan from July 18th to July 20th of this year, bringing the Korean forced labor issue into focus again. From the Japanese colonial period up until the end of World War II, around 150,000 South Koreans were forced to work for Japanese companies without compensation. After the war, these victims came forward to seek compensation.

Although the Japanese and South Korean governments settled this issue by signing a special agreement more than 50 years ago, the agreement failed to resolve the compensation dispute, which is the main pain point that has caused the current trade war. Most importantly, the relationship between Japan and South Korea has not improved even after entering this agreement.

In 1965, the normalization of South Korea and Japan relations was confirmed after both sides signed “The Treaty on Basic Relations Between Japan and the Republic of Korea.” Some of the documents on the establishment of diplomatic relations involved the issue of Korean forced labor compensation that Japan had requisitioned during World War II. Under the agreement, Japan compensated the South Korean government with $300 million in funds and extended a low-interest loan of $200 million. The agreement also states that all claims have been “resolved and thoroughly.”

The funds were used for massive industrial construction in South Korea, but not all South Koreans were satisfied with the agreement. Many victims of World War II believed that the government’s compromise could not obliterate the issue of personal compensation, so they always insisted that the agreement was invalid.

In 2018, South Korea’s supreme court ordered a Japanese firm, Nippon Steel Corporation (created as a result of the merger between Nippon Steel and Sumitomo Metal in 2012), to compensate Koreans who were used as forced labor during the colonial era. There were also several other Japanese companies involved. For example, Mitsubishi Heavy has refused to comply with the court order, while the other two companies have had their assets seized in South Korea.

For this charge, the Japanese government has claimed that the 1965 treaty had settled all reparation issues. Furthermore, the Korean government has agreed to the settlement by receiving the entire fund from the Japanese government. Therefore, the adjudication of South Korea’s supreme court violates the treaty. However, the Korean supreme court claims that the agreement did not expressly regulate the rights of individual workers for lawsuits.

In July 2019, Japan’s Ministry of Economy, Trade, and Industry (METI) imposed a rigorous export restriction on semiconductor materials to South Korea. Furthermore, in August of the same year, it removed South Korea as a favored trade partner, the so-called trading “whitelist.” 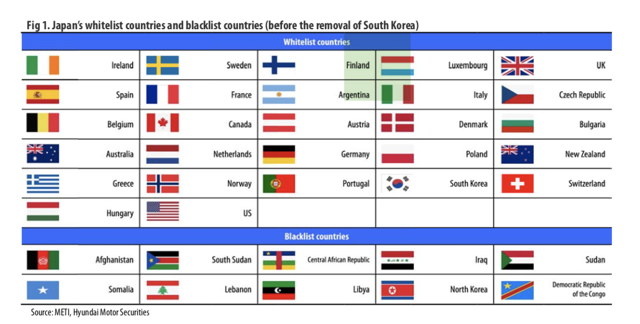 The Japanese government has restricted exports of hydrogen fluoride, fluorinated polyimide, and photoresists which are mostly only produced by Japanese companies. Furthermore, these are all necessary materials for the Korean semiconductor industry.

These restrictions not only influence the Korean economy but will also affect other international companies in the global electronics supply chain. At the same time, Koreans have started a series of boycotts of Japanese products and travel to Japan. As a result, the economic pain has been concentrated in specific industries rather than spread across South Korean and Japanese industries evenly. (S. Shin and E.J. Balistreri, 2022). 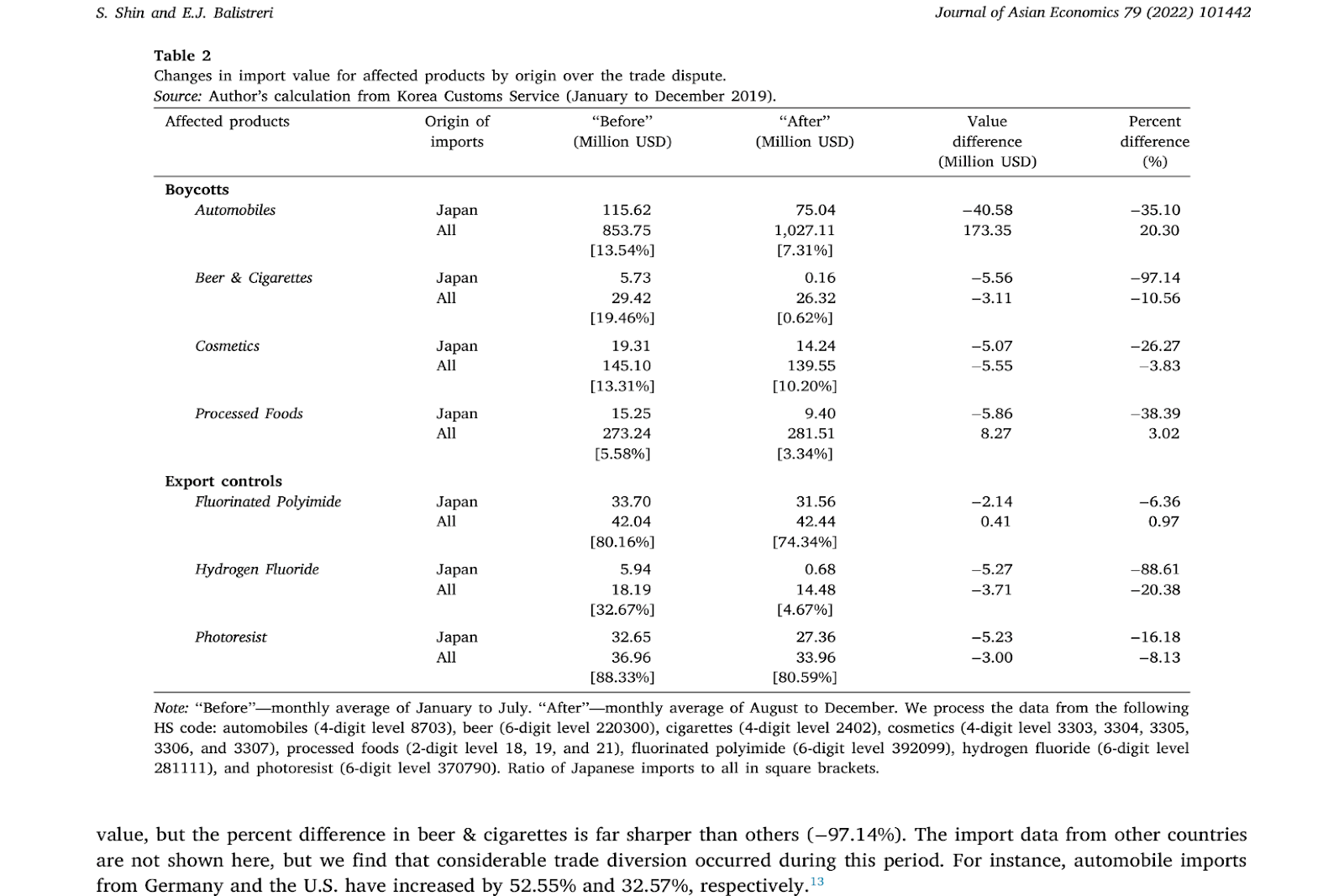 (Figure 2. Changes in import value for affected profucts by origin over the trade disputes.)

After 1965, the normalization between the two countries moderately changed the hostile relationship to a closer alliance; however, the status quo changed after the Moon Jae-in government took office.

In 2018, to curb gradually declining public support, the Moon Jae-in government resurfaced controversial debate regarding forced labor during the Japanese colonial period, which had been seemingly resolved during the Park Geun-Hye administration.

By bringing back this controversy, former President Moon tried to reach reconciliation between the progressive and conservative parties in Korea. In addition, public opinion has driven South Korean policy towards demanding further compensation and public apology from Japan. This can help explain the origins of the current Japan-South Korea trade war. Moreover, this has caused the most significant deterioration of diplomatic relations since the treaty of 1965.

However, within the modern East Asian region, both countries have shared values. The democratic systems of both countries are precious, not to mention the profound and tight economic bonds they share—furthermore, they have a close connection due to their joint security protection status from the United States.

Japan and Korea have similar political stances in modern East Asia regardless of their historical relationship. Most significantly, they share concerns about China’s growing influence.

Furthermore, both Japan and Korea have faced economic coercion from China. For example, they met the lash-out of export bans, product boycotts, and import and tourism restrictions. However, the repercussions were severe because the economies of both countries rely heavily on China. Besides the shared economic concerns, Japan and Korea have shared security interests, such as the controversial territorial acquisition in the Indo-Pacific sea under the Chinese hegemony and the nuclear proliferation of North Korea.

To approach the bilateral relationship delicately, discussing the discernment gap between Japan and South Korea requires extra caution. Korea has framed Japan as an instigator and criticized it for not taking responsibility for its history. By focusing on Japan’s past and linking it to Japan’s Dokdo proposition, South Korean politicians can quickly stir up national sentiment and use this political shortcut to gain votes.

Expansion of the U.S.-Japan security alliance is highly untrusted by the Korean people due to the history of the Japanese invasion. After World War II, giving up the right to resolve disputes with other countries through military means and banning military conscription was Japan’s most significant compromise and gesture to admit its mistake. Therefore, from the Korean perspective, the alliance of security posture between U.S.-Japan is considered too soon. The consideration caused Koreans to be reluctant to embrace the possibility of U.S.-Japan-ROK security cooperation.

Japan as the third largest economy in the world (MENA Report, 2017), has also been one of the main trading partners with South Korea. However, South Korea and Japan have temporarily shelved their FTA due to historical disputes. To comply with the public opinion of the two countries, leaders have to take a tough stand for votes, so the Japan-South Korea trade war is more of a political conflict than an economic dispute.

Although Japan and South Korea have not signed an FTA, the fact that they both participated in RCEP has caused less effect whether the two sides have signed an FTA. Therefore, without external pressure or threats, it is difficult for the two countries to reach a genuine reconciliation.

Post Modern Korea포스트모던코리아］is a documentary series produced by the Korean Broadcasting System. Director Taewoong Lee has been chosen as the director to film the first episode for both Modern Korea seasons one and two. The timeline started in the 1980s with the Korean modernization. It vividly depicted the struggle of Korean to remove their identity and connection to the Japanese colonial era’s influence. And how they managed to proceed from being a broke and underdeveloped country to what they have become now. It portrayed the Korean Japanese relationship from the historic aspect of the society and also the modern aspect.

This is a text widget. The Text Widget allows you to add text or HTML to your sidebar. You can use a text widget to display text, links, images, HTML, or a combination of these. Edit them in the Widget section of the Customizer.